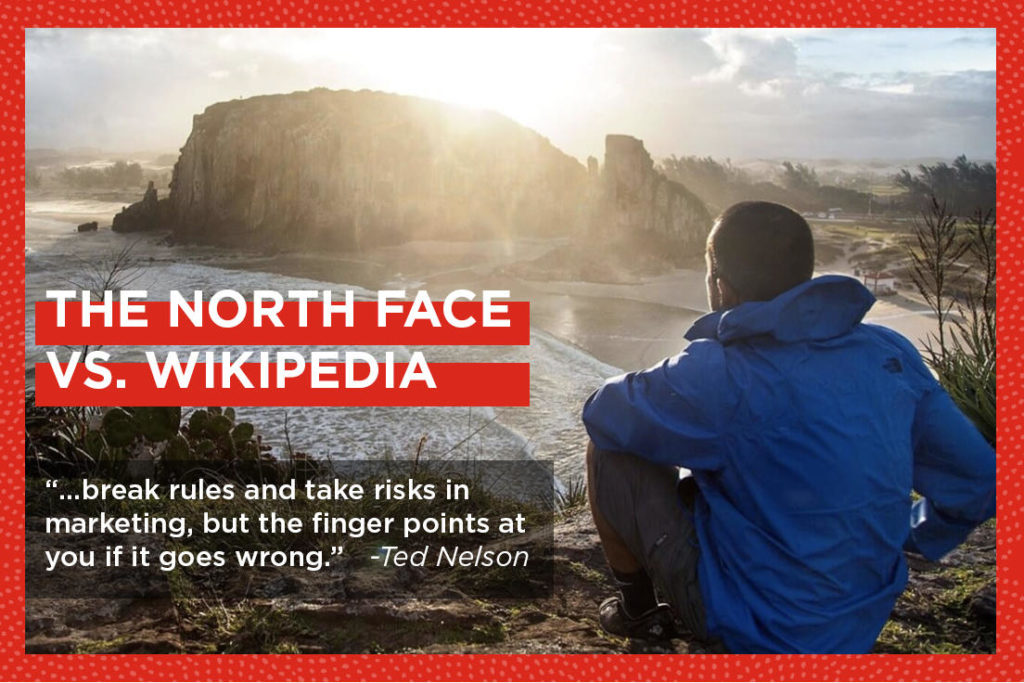 Constant change and digital distraction force the most ambitious, restless marketers to take risks in order to capture the attention of consumers. And when risks are taken, sometimes they backfire. But brands like North Face deserve kudos (at least among us fellow marketers) for trying—because the worst thing one can do is play by the rules in an inherently unruly world.

Such is the case with North Face’s recent stunt, in which its Brazilian office hacked Wikipedia to showcase products in an unexpected, attention-seeking manner.
Criticism of the campaign was harsh and swift, which was justified in the minds of many. But, I say more power to them for getting creative about getting attention.

We’re in an era of restless markets that demand restless marketing, meaning we must take measured risks to get consumers’ attention, leveraging every paid, earned and owned asset available. In the search for unexpected opportunities to gain attention, we should make “No lazy assets!” our mantra. And, if we’re honest with what we’re tasked with as marketers, it’s using every asset to break rules and grab attention for a brand. Whether it’s pretending that “Trash Isles” is an actual country, as was done in last year’s Cannes winning effort to showcase plastic accumulation in our oceans, or thinking differently about how to showcase your brand on public platforms such as Wikipedia. However, the public backlash over North Face’s stunt is a reminder that when it comes to risk-taking, you’re damned if you do and damned if you don’t. And, in this case, North Face was doomed when it didn’t fully factor in the power of the Wikipedia community.

While I think North Face’s marketers were correct in seeking unexpected ways to get their brand on the radar, when they hacked an online community serving the public good, they crossed a line. The key flaw in their campaign was a lack of understanding of the Wikipedia brand and its community. Wikipedia’s 250,000 volunteer editors should have been the first audience North Face considered, as they’re a passionate and tightly knit community that view themselves as serving the public good. They care deeply about facts, and North Face hijacked their carefully built world for their own benefit. That decision didn’t just alienate the Wikipedia community, it also destroyed the campaign before it could garner the attention it was designed to grab.

One successful example of a brand hacking a free platform to engage a community is Budweiser’s award-winning campaign, “Tagwords.” This campaign also sought to leverage a free platform, in this case Google search, in order to connect with curious fans of pop culture. Over the years, Budweiser has been featured in many classic photos of famous public figures, and Budweiser wanted to showcase those photos without paying the licensing fees. So, it created ads that, instead of showing the famous images, described the photos using tagwords and directed people to “search it.” Curious Googlers went in search of the photos and discovered Budweiser’s presence. Unlike North Face, Budweiser’s risk-taking successfully connected a free asset with fan passion.

A fear of failure cannot prevent us from trying to capture the opportunities presented to us by restless markets. Here are some lessons to be learned from this North Face activation to help you maximize your risk and minimize your backlash.

To have an impact on the community you want to connect with, understand the stories that engage them and how they want to hear those stories. North Face’s decision to showcase its products and stories on the scenic pages of Wikipedia was smart in theory. But the brand hadn’t considered that getting in front of the Wikipedia community via deception would alienate the very people they wanted to reach.

Leave no stone unturned in seeking ways to break rules and category conventions to stand out; from in-store signage to customer-service reps to the sides of the trucks. But don’t hijack a meaningful consumer touchpoint only in the quest for attention; make sure there’s a strategic fit.

Be authentic to your brand.

When getting creative with your marketing strategies, make sure all efforts embody your brand at its authentic core. If you’re a healthcare company, do unexpected things that prove you care about people’s health. Or in the case of the Budweiser stunt, find the fit between your product and relatable pop culture moments.

North Face’s Wikipedia stunt is not just a demonstration of the lengths brands will go to for attention, it also illustrates the very real challenges marketing decision-makers face today. On the one hand, you absolutely must break rules and take risks in order to gain attention. On the other hand, should things go wrong, all fingers will be pointing at you. In the end, I give North Face credit for finding a way to reach as many people as possible in an era when marketing budgets are stretched. The brand’s risky and unexpected approach resulted in way more attention than it could afford to buy with traditional advertising, even if it was the wrong kind of attention.

Jay Chiat famously said that any press is good, even if it’s bad. Only time will tell if this is true in the case of North Face.